skip to main | skip to sidebar

Timetravel to the Cave Gladium 2009 in Furth in Wald 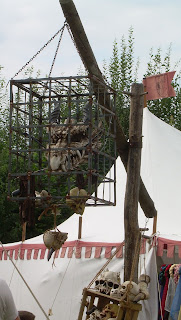 This leap of faith will be needed in more ways then one...


... to make along story short, shtuff happens....
needless to say life intervened and the blog bit the dust for awhile..
but things are looking like they are getting back to normal if you can call it that and I have some catching up to do.
The weekend in Furth in Wald was great and we spent way to much money at the Cave Gladium. Lot's of men in tights; some carried it off better then others but they were all absolutely fearless and in the spirit of things. 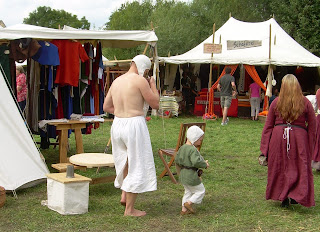 The organizers of the festival really have managed to keep a certain level of authenticity over the years, very little was totally out of place other then us visitors naturally. While the participants certainly covered a larger period in time from the early through the late middle ages most really tried to live as authentic as possible within their chosen era and many of them with their children in tow. Watching them in their daily life, the artisans working in their trade and then being able to see and purchase their wares was really a feast for the eyes and ears. 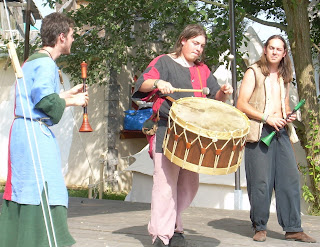 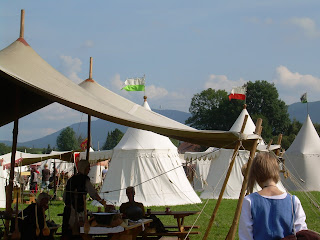 I had many conversations with the artisans about their effort to not only produce wares that came from the middle ages but also using the correct tools of the trades and times. 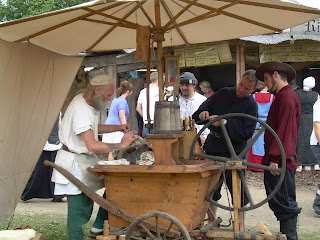 No coolers or BBQ of the modern days, open fires and one bowl stews were cooking in front of many tents. Tradesmen brought in raw food on wagons that could be purchased. A large lot set aside stocked with firewood so the surrounding forests were not pilfered. Drinking water came from a created well and had to be carried from there by bucket or jug. The latrines were of modern function due to the health issue arising from thousands in need of relief but they were cleverly disguised and one could not tell from the outside that modern conveniences were behind the door. 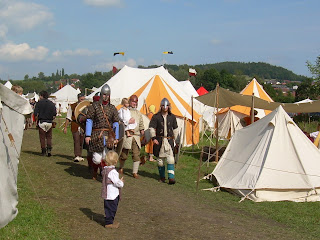 All in all a refreshing relief from that disneyfied influence most everything has in the USA, it was anything but..
We had a great afternoon and had it not been for our niece's wedding which we really did not want to miss we would have been back at the Cave Gladium in a heart beat. 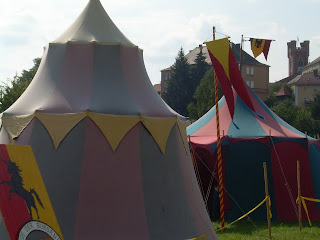 Posted by Bavarian Expatriate at 3:04 PM

Bavarian Expatriate
Des Moines, Iowa, United States
I have always had a hard time keeping up with friends and family, maybe this way they can keep up on my doings and with a bit of luck I might find the odd new friend. We'll give it a whirl.......... nachand back mas hoit oh