skip to main | skip to sidebar

The Joys of Gardening 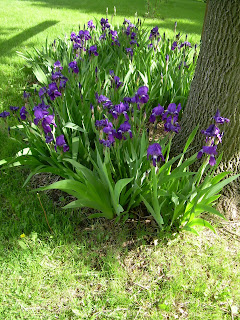 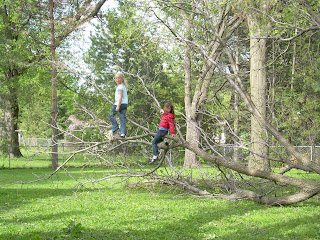 These last few days summer has definitely decided to stay for a while. The end result is an abundance of grass and weeds mainly in form of dandelions, I used to like those when I was little ...
So weeding, planting and mowing has been on the agenda, though I have to be honest .. I don't mow.. raising five children has to bring some sort of reward, I count not having to mow as one of them. Just to make things more interesting I also have a 25 to 30 foot long walnut tree trunk laying in the back yard. Its branches are piled in a heap waiting to be whittled down. We bought ourselves a handy wood chipper that really does the trick quite nicely. My true love is making some trellises that go along with the fence he built for me a few years back. So things are moving along. And best of all, I think I finally outwitted my ground squirrels, they know the back yard is danger territory due to the dogs, but my front yard and my pots in particular were their playground, the last 3 summers.
I would almost on a daily basis have to replant my flowers or at least add dirt that they dug out.
The first summer I had no pots, the second summer neither and I was amused, well ground squirrels are kinda cute, the third summer I had pots and now I saw them for what they are, pesky little rodents. I needed help, I got puppies but they had to grow a bit first they were hardly bigger then a regular squirrel themselves when we got them. The following year and 4th summer we had some hunting success and we had the odd dead critter brought to us and my pots on the backstairs had finally a greater survival rate. Only the pots on my front stairs were still under attack. So I tried to flush them out with a water hose though this only resulted in my husband complaining about my watering the plants too much and the water bill skyrocketing. A good thing I have not told him why we had such an increase. You would be amazed how much water you can let go down a ground squirrel hole, without any dent in their population. They were probably sitting in one of their air holes watching me and laughing themselves silly, but I cannot use poison due to dogs and other critters that would eat either poison or poisoned ground squirrel.
This year I upped the ante, I got out my big container of Cayenne pepper and covered the top of my newly planted pots and my 2 grapefruit trees that come outside every summer with a nice layer of Cayenne pepper. And so far so good, not a paw print on any of them, no holes dug, and the red topping on the soil goes nicely with the bricks.
The lilacs and large irises are blooming, the Siberian irises are growing tall, the clematis' are setting on blooms and so are the roses. The bamboo is shooting up stalks and you can almost watch it grow so far so good on that experiment.
The many hydrangeas are leaved out and the magnolia was done blooming weeks ago, all the other little flowers too numerous to mention are in bloom mostly shade plants due to the fact that 22 mature trees don't let in a lot of light one of the reasons why one walnut had to go it was #23.


Posted by Bavarian Expatriate at 6:33 PM

Labels: Grandkids on walnut tree and Irises in front yard

Bavarian Expatriate
Des Moines, Iowa, United States
I have always had a hard time keeping up with friends and family, maybe this way they can keep up on my doings and with a bit of luck I might find the odd new friend. We'll give it a whirl.......... nachand back mas hoit oh